Jason Graae as the Cat in the Hat. Photo by Kevin Graft.

As we streamed through the front gates of the Wells Fargo Pavillion, my 9-year-old daughter and I were giddy with anticipation for the opening performance of Music Circus’ Seussical. The welcoming courtyard with fountain added just the right ambiance to assure us that we were going to have a wonderful time.

Once seated, we noticed the stage set up was simple, yet impressive; there was a giant red and white striped Cat in the Hat hat, placed in the center of the round stage. As soon as the show started, you were quickly drawn into the whimsical world of all your favorite Dr. Seuss characters. The main theme for Seussical is “a person’s a person no matter how small,” but there are many, many other familiar messages hidden throughout the show as well. My daughter loved the story line; she was especially impressed when Horton the Elephant saved the Who’s in the end of the play. Young actor Josh Davis and his wonderful voice were truly impressive. 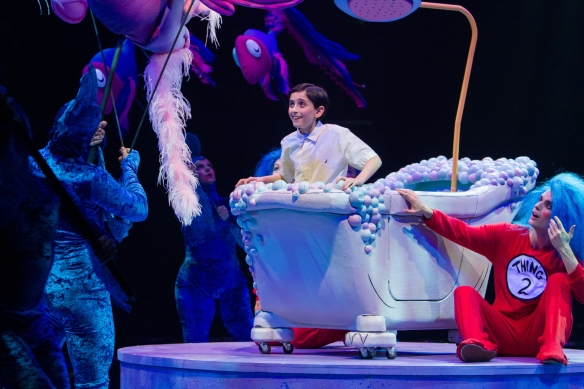 While this was not the first time we’ve seen Seussical, we were delighted to see that Music Circus had added a few embellishments of its own to the musical. Having the moving stage in the middle of the room, like a circus arena, made the performance very intimate and gave everyone in the audience a great view of the stage.

All in all, Seussical is a whimsically fun treat for people of all ages. Seeing audience members from ages 4 to 84 reminded me that Dr. Seuss’ stories are just as relevant today as they were when first published.

Seussical takes over the Wells Fargo Pavilion through July 17. For tickets and showtimes, visit the musical’s listing on Sacramento365.

Note: If you and your little one are planning to snack, head to the concession stands before the show (treats are welcome inside the theater during performances.) The 20-minute intermission gives you enough time to stand in line to purchase food, or run to the restroom, but probably not both.